5 replies to this topic 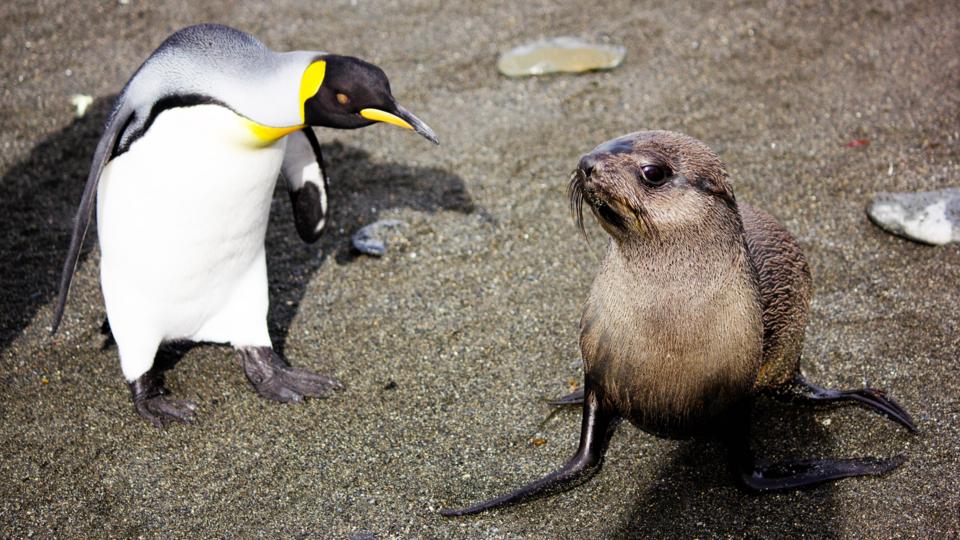 Seals discovered having sex with penguins.

Fur seals have been caught engaging in an extreme form of sexual behaviour. Specifically, trying to have sex with penguins.

Warning: You may find the videos in this story (linked) disturbing

Things are heating up in the cold climes of the sub-Antarctic. On a remote, and mostly desolate island, seals have been caught engaging in an extreme form of sexual behaviour.
Specifically, they have been trying to have sex with penguins.
More than one fur seal has been caught in the act, on more than one occasion.
And it's all been captured on film, with details being published in the journal Polar Biology.
The sexual behaviour of the fur seals hasn't come as a complete shock to the scientists that recorded it.
In 2006, they saw, for the first time, a fur seal attempting to copulate with a king penguin, on Marion Island, a sub-Antarctic island that is home to both species.
They published details of that incident, and speculated that the sex act at the time may have been the behavior of a frustrated, sexually inexperienced seal. Or an aggressive, predatory act. Or a playful one that turned sexual.
Two incidents occurred on Goodhope Bay, and one on Funk beach. The incident in 2006 occurred on a different beach again, called Trypot.
"This really made us sit up and take notice," said de Bruyn, of the new sightings.
All four known sexual incidents followed a common pattern. Each time a seal chased, captured and mounted the penguin. The seal then attempted copulation several times, lasting about five minutes each, with periods of rest in between.
Male and female penguins mate via an opening called a cloaca, and the seals are thought to have actually penetrated the penguins in some of the acts, which were caught on film by Haddad.
In three of the four recorded incidents the seal let the penguin go. But on one of the more recent occasions, the seal killed and ate the penguin after trying to mate with it.
Fur seals often catch and eat penguins on the island.
The incidents are the only time pinnipeds, the group that includes seals, fur seals and sea-lions, have been known to have sex with an animal from a different biological class, in this case a mammal trying to have sex with a bird.
The scientists can only speculate about why the seals are behaving this way.
But the new observations suggest that having sex with penguins may be becoming a learned behaviour among seals on the island.
"Seals have capacity for learning - we know this from their foraging behaviour for example," explained de Bruyn.
So male seals may see each other coercing penguins, then attempt it themselves.
That might explain why the number of incidents appears to be increasing. "I genuinely think the behaviour is increasing in frequency."
But "if this is learned behaviour, we really can’t think of what the reward may be for these young males," he adds. "Other than perhaps learning that these birds are an easier target to practice their copulatory skills."
The seals were not yet old or large enough to defend harems of female seals, explained de Bruyn.
"Perhaps it is a release of sexual frustration, given the hormonal surges during seal breeding season. It is very unlikely to be failed mate recognition - i.e. the misidentification of the penguin as a female seal.
"All in all it's difficult to say really," he admits. Two incidents occurred on Goodhope Bay, and one on Funk beach. The incident in 2006 occurred on a different beach again, called Trypot.

Well, Cannabis is known as a natural aphrodisiac..

Webster says wicked and evil, but yo, who's Webster?

Back to Life & Advice